Every year I offer to teach a course in our homeschool co-op, and I’ve taught astronomy many of those years. One year I was given a class of 3rd and 4th graders, and the focus of the class was planetary astronomy.

Every week I grilled them on the names of the 8 planets: Mercury, Venus, Earth, Mars, Jupiter, Saturn, Uranus, and Neptune. 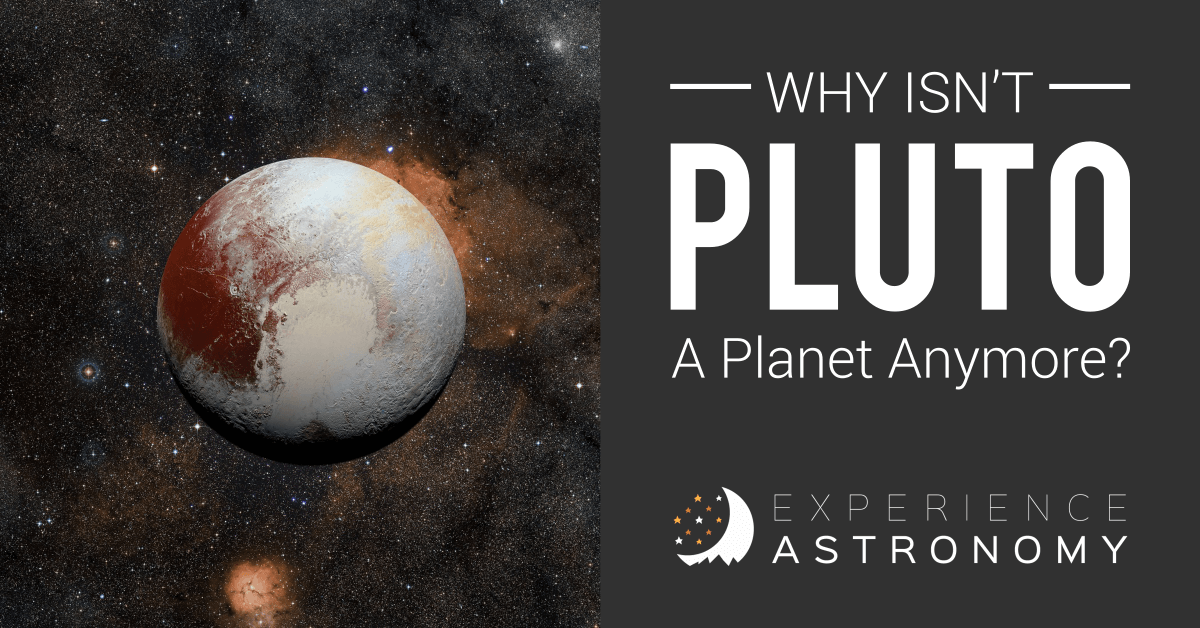 On the first day of class, one of the students said he had mnemonic device to remember the planets:

“Cute,” I said, “except two things: first, you don’t need a p-word at the end because Neptune is the last planet; and second, there aren’t nine planets in solar system.”

Thus began the weekly debate about whether Pluto was in fact still a planet: that is, after all, where the p-word in older mnemonic devices comes from. “Why do these kids even care about this?” I wondered. “They were barely alive along enough to remember when Pluto was a planet. What gives?”

Despite its small size, from 1930 to 2006, Pluto enjoyed planetary status with the other big boys. But for the last decade it has been demoted to “dwarf planet,” courtesy of the International Astronomical Union.

What led to this change in classification?

In 2006, the International Astronomical Union (IAU) changed the classification of Pluto from planet to “dwarf planet.” After the discovery of more objects in the Kuiper belt (beyond Neptune, where Pluto lives), it was decided the definition of “planet” needed to be clarified, which resulted in a change of Pluto’s classification.

The Changing Definition of Planet

The definition of “planet” has been in a slow flux for hundreds of years.

In ancient times and up to the Copernican Revolution in the mid-1500s, the definition of planet was pretty stable. The word “planet” simply means “wanderer,” because there were special objects in the sky that didn’t play by the rules of other stars. They wandered through the sky against the background stars over time.

These wanderers included Mercury, Venus, Mars, Jupiter, and Saturn (the five classical planets we can see with the naked eye), as well as the sun and the moon (which were also “wanderers”). The Earth was not a planet because we largely believed it was motionless in space: the sun, moon, planets, and stars all revolved around us.

Then with the mathematical and astronomical innovations of men like Nicolaus Copernicus, Johannes Kepler, and Galileo Galilei, people started to see the universe differently.

The sun was no longer a wanderer: it was now the fixed object in space. We moved around it, not the other way around.

With the discovery of moons going around other planets, our moon took on a new classification: a satellite.

With the slowly accepted understanding that the planets revolved around the sun, the classification “planet” gained a new member for the first time ever: the Earth. This had amazing implications for scientists. If we live on a planet, then do these “wanderers” bear any resemblance to us in any way? These are not just dots of light but other worlds! With telescopes pointed at the heavens, astronomers sought to learn all they could about planets.

Uranus was discovered by William Herschel in 1781. At first he thought it was a comet, but further observations confirmed it was moving more like a planet than a comet. This discovery not only made Herschel famous but it added a never-before-seen member to the planetary family. Uranus was confirmed as the 7th planet from the sun.

By 1846, a new major discovery was added to the list: the position of Neptune was computed mathematically by Urbain Le Verrier and then visually seen by Johann Gale. This was, again, another breakthrough for planetary astronomy.

Around this same time, other objects were discovered, all of them located in what we now call the asteroid belt (the collection of millions of asteroids and meteoroids between Mars and Jupiter). These were relatively large objects:

What were these new objects? It was clear they were much smaller than other planets, so some started calling them “minor planets.” William Herschel (the discoverer of Uranus) coined the term “asteroids” (meaning “star-like”) after Olbers found Pallas. Others classified these as planets.

By the 1830s, school children were taught about “the 11 planets”: Mercury, Venus, Earth, Mars, Ceres, Pallas, Juno, Vesta, Jupiter, Saturn, and Uranus (Neptune was not yet discovered).

By 1851, about 15 more astroid/planet-like objects had been discovered, and the question became clear: Do we just keep adding planets to the solar system or do these smaller objects not really count? By then, it had become common to classify these minor planets using Herschel’s word: asteroids.

The former planets Ceres, Pallas, Juno, and Vesta got the boot—and without much complaint from the public. They were just too small, and unlike the other planets, they were all jumbled together in the same place: in the asteroid belt.

Without any official pronouncements, by 1900, the solar system was home to just 8 planets again.

American astronomer Clyde Tombaugh found a new object well beyond the orbit of Neptune. Not sure what to name it, he received more than 1000 suggestions from all over the world. It was finally an 11-year-old girl from Oxford, England who suggested the name Pluto, the Roman name for the god of the underworld.

It was a bit of a planetary oddball. Unlike the planets beyond the asteroid belt, it wasn’t very big—actually, it was smaller than even Mercury. Still, it was classified among the planets, and the official number went to 9.

For over 60 years after Pluto’s discovery, astronomers theorized that Pluto was not alone but there was no direct evidence of this until 1992. After 5 years of searching, David Jewitt and Jane Luu at the University of Hawaii found a small object beyond the orbit of Neptune. Six months later they discovered another object.

Soon it became clear there were potentially many objects beyond Neptune, and the this body of objects was given a name: the Kuiper belt, named after the planetary scientist Gerrit Kuiper.

From that point, the question for planetary astronomers was this: Is Pluto really a planet or just a large object in the Kuiper belt? 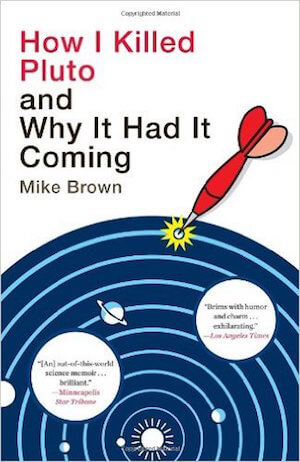 In his book, How I Killed Pluto and Why It Had It Coming, astronomer Michael Brown says the demotion of Pluto was much like that of objects in the asteroid belt in the 19th century.

“Just as the explosion of asteroid discoveries 150 year earlier had forced astronomers to reconsider the status of Ceres, Pallas, Juno, and Vesta and change them from fully-fledged planets to simply the largest of the collection of asteroids, the new discovery of the Kuiper belt would certainly force astronomers to reconsider the status of Pluto.” (p.27-28)

Over the years, Brown and his colleagues continued to look in the direction of the Kuiper belt for any large objects that might be there. They found Quaoar in 2002—about half the size of Pluto—what Brown called “a big icy nail in the coffin of Pluto as a planet” (p.85). Many other big discoveries followed: Haumea in December 2004, Eris in January 2005, and Makemake in March 2005. (These three objects would later go on to be classified as “dwarf planets” by the International Astronomical Union.)

These and many other smaller discoveries demonstrated the Kuiper belt was far larger than the asteroid belt—20 to 200 times more massive, and mostly composed of ices. And with these discoveries, the question of Pluto’s planetary status was questioned.

When the IAU met in 2006, two resolutions were proposed concerning Pluto.

The first was Resolution 5A: The definition of “planet.” It was decided that a planet needs to have three characteristics:

The resolution also proposed a new term: “dwarf planet.” A dwarf planet meets the first two criteria above, but not the third: dwarf planets are not dominant enough to have cleared their neighborhoods of other objects.

Once this resolution was passed, Pluto was officially no longer a planet but a dwarf planet.

The term “dwarf planet” is a bit of a misnomer. Just as a dwarf tree is a tree and a dwarf star is a star, one might think a dwarf planet would be a planet. This was the original intention behind this label. There was a second IAU resolution, 5B, where “dwarf planet” would be considered a subtype of planet, but this resolution was defeated the same day 5A was passed.

So we are stuck, for the moment, with an odd label for Pluto.

Today there are 5 dwarf planets:

So, with Pluto now a dwarf planet, my students have only 8 planets to memorize. So every year I tell them…

If your child loves learning about the planets, they will love Experience Astronomy.

We cover so much more than the planets in these full-school-year online courses. Students learn about…