On Monday August 21, 2017, millions of people in the United States will experience a unique event: a total eclipse of the sun.

Below is a guide for planning a field trip to see this rare event.

Why Travel to an Eclipse?

Perhaps it seems silly to travel somewhere to watch a total solar eclipse, but those who have witnessed these events can testify to how fascinating they are to see.

In the moments before the moon completely covers the sun—what is called “totality”—the world around you will begin to change.

Finally, at totality, the sky will grow very dark—dark enough to see stars and planets. As you look up at the sun, you’ll be able to see the corona of the sun, the hot atmosphere of the sun that is usually completely blocked from view.

What’s So Special About the Great American Eclipse?

The eclipse occurring on August 21, 2017, will sweep across the United States, starting in the Pacific northwest, fly over the plains, and end on the  South Carolina coast.

Where Do You Travel to See the Eclipse?

The “umbra” of the moon’s shadow (the part where all sunlight is blocked) will hit a rocky beach just north of Newport, Oregon around 10:15am Pacific time. From there, the shadow will race across the U.S. in just 93 minutes. Finally, folks in McClellanville, South Carolina will watch the shadow move out into the Atlantic.

The #1 goal is to get into the “path of totality.” When it comes to seeing a total eclipse, “close” is not close enough. You’ll want to be directly in that path, because outside of that path, the sun will only be partially covered.

About 12 million people are lucky enough to live in the path of totality, and about 200 million are within a day’s drive of the path.

Where you go to see the eclipse will be based on a number of factors:

Where Will Weather Be the Best?

Obviously, no one can accurately predict weather months in advance, but weather experts have compiled satellite data from the last 20 years for late August along the path of totality.

The best chances for cloudless skies start in the Willamette Valley of Oregon, running through Idaho and Wyoming to the Nebraska Sandhills. There’s a 70% chance of clear skies in this stretch, with some of the best sites in Oregon and Idaho having an 85% chance. Once clear of the Rocky Mountains, the odds of clear skies diminish slightly through the Plains. Cloud cover climbs steadily after the eclipse shadow crosses the Missouri River and is worst in the Appalachians.

Starting the week before the eclipse, there will be more reliable forecasts, which will enable people to choose a precise location.

For a list of some of the best locations to see the eclipse, go to GreatAmericanEclipse.com.

You can also look for communities in the path of the eclipse and see what’s happening there.

What Do You Need to Bring?

An absolute MUST are eclipse glasses for everyone in your party. You should NEVER stare at the sun without using approved filter material designed expressly for solar viewing.

The ONLY TIME you can view the eclipse directly without these special glasses is during totality, when the disc of the sun is completely covered by the moon.

Be sure to bring hats, sunscreen, umbrellas—anything to prepare you for the hot August weather under the sun.

Bring your own entertainment and food. You’ll want to set up camp somewhere well before the eclipse starts.

What Do You Do the Day of the Eclipse?

Depending on your location, the moon will begin to eclipse the sun between 70 and 90 minutes before totality. This is the slow build-up to darkness. After totality, the moon will slowly leave the disc of the sun, taking about the same amount of time.

Keeping in mind the time of totality at your chosen location, and the fact that there may be many pilgrims traveling near you, you will want to set up camp plenty of time before the moon begins to cover the sun.

Make sure everyone has their glasses on.

At the moment of totality, everyone can remove their glasses. There is only a small window of time, so take advantage of every second. Look up to see if you can observe any stars, constellations, or planets. Looking out at the horizon, you’ll be able to see what looks like a sunset glow because miles away the sunlight is hitting the ground all around you.

From now until the day of the eclipse, you can see my video lesson about solar eclipses from the Experience Astronomy course for free! This is exclusive content, usually only for those who are registered for the course, but from now until August 21, you’ll be able to watch it with your kids! 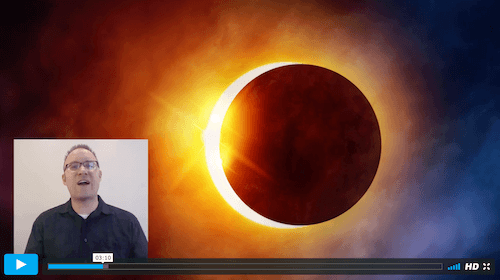